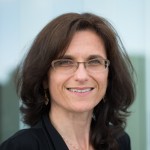 Note: Elizabeth is on leave from UBC, and has joined Monash University in Melbourne Australia as Dean of Engineering effective January 2018.  Please see her updated contact information here.

Elizabeth Croft is Senior Associate Dean for the Faculty of Applied Science, director of the Collaborative Advanced Robotics and Intelligent Systems Lab, and a registered Professional Engineer in the Province of British Columbia. Her research investigates how robotic systems can operate efficiently and effectively in partnership with people, in a safe, predictable, and helpful manner. She is author of over 140 refereed publications in robotics, controls, visual servoing and human robot interaction.  Applications of this work range from manufacturing assembly to healthcare and assistive technology and her work has been funded by industry partners including Thermo-CRS, General Motors and Hyundai Heavy Industries.

In her prior role as Associate Dean for Education and Professional Development, Professor Croft is responsible for  undergraduate, graduate and professional educational initiatives in Applied Science at both the Vancouver and Okanagan campuses. She lead the development and successful launch of eight new professional programs in Engineering, Planning and Health in 2016, and spearheaded new undergraduate and graduate educational exchange programs with university partners in Europe, Australia and Asia. Over the past two years, she guided the development of the biomedical engineering undergraduate program and the creation of the School of Biomedical Engineering.

Professor Croft served as NSERC Chair for Women in Science and Engineering, BC & Yukon (2010-2015) founding Westcoast Women in Engineering, Science, and Technology (WWEST) to attract, recruit, and retain women in engineering and science careers.  Over her tenure as Chair the percentage of women students entering first year engineering at UBC increased from 20% to 30%. WWEST continues to work at national, regional, and local levels with organizations engaged in increasing the number of women in science, technology, engineering, and math (STEM) disciplines through multilateral partnerships spanning community, academic, and private sector partners. She also served as Principal Investigator for the National NSERC Chairs for Women in Science and Engineering Network and is PI for the Canadian Social Science and Humanities Research Council  project “Engendering Engineering Success” aimed at increasing the participation and retention of women in engineering careers.